A Brief History of Epiphany 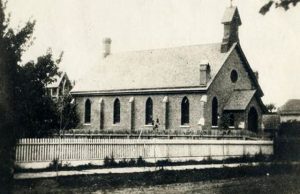 The parish flourished providing a center of spiritual life, social life and social responsibility to the neighborhood for over fifty years. But the world was changing following World War II as people from the city to the suburbs. By 1952, it was apparent that the parish needed to take a hard look at itself and its environment. Many parishioners had moved to western suburbs and the character of the neighborhood had changed. Church population declined despite determined efforts to attract those who had recently moved into the neighborhood. After careful consideration, the Vestry decided in 1958 to relocate to the suburbs, following many families who moved there. 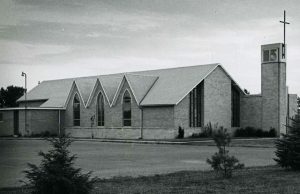 To preserve the heritage of the parish, many furnishings from the old church were incorporated into the building, including the altar, pulpit, baptismal font and two beautiful stained-glass memorial windows, one dating from 1882, which had been the centerpiece of the altar window ensemble. 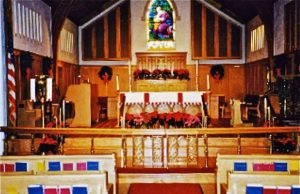 The Church of the Epiphany began in the winter of 1866-’67 as a mission of St. Luke’s parish. The first Episcopal parish in the Rochester area with a series of cottage meetings in individual homes. Within three years, a mission chapel was built to provide the fledgling congregation with a permanent home, a Vestry was elected and a Sunday School organized.

The mission grew, prospered and was formally organized as a separate and independent parish in 1876 with 170 families and a church and rectory valued at $18,000.

In the early 1870’s a bell tower was added. In 1882 the chancel was recessed and a memorial window was added substantially improving the appearance of the church. In 1891 a transept and parish room were added to the north side of the church. 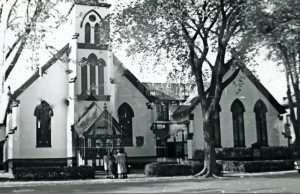 The church purchased seventeen acres of farm land in the Town of Gates, and groundbreaking for a new, modern church took place on June 8, 1960. The Jefferson Avenue church was sold to a Seventh Day Adventist congregation. The last service in the old church was on Easter Sunday, 1960. Until the new church was built, services were held in the Arnett Avenue Branch of the YMCA. The first service in the new church on Buffalo Road in Gates was on Christmas Eve 1960.

The transplanted parish took root in its new location and the building was enlarged in 1966 to provide Church School classrooms and meeting rooms. Since then a memorial garden, an indoor columbarium, and an outdoor columbarium were added.

In 1999 the Chancel was renovated to make it more accessible to parishioners who are physically handicapped, to bring the altar closer to the congregation and to make the chancel area more flexible, more usable. 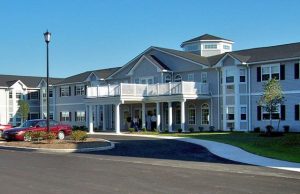 Finally, in a history written for the church’s 75th anniversary the Rev. Harold Knight wrote: We who look to the past can be proud and pleased, but to each generation comes a new call to spread the Gospel of our Lord Jesus Christ. . . . This history is a record of the faithful men and women who are no longer with us in this world, who have given their lives that this parish might be a beacon to God. It is for us to hold aloft the light in our time and pass it on to those who will follow. The past is a matter of record. The future is yet to be won for Christ. Our lives under God will make this possible.